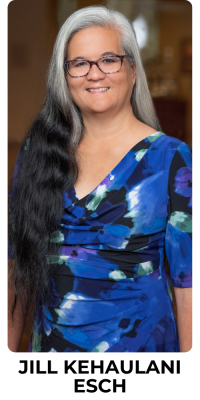 DESCRIPTION:
The panel will discuss the approach in four jurisdictions to address these challenges and improve services and support Reconciliation.  Ombuds offices in North America offer a unique approach to the challenge of holding governments to account for injustices encountered by Indigenous people. The flex, low, or no cost confidential resolution focus of ombuds can facilitate accountability, transparency, and dispute resolution. However, challenges, exist in effectively serving Indigenous communities, including low awareness, issues of trust, statutory limitations and adherence to existing processes.

Jill Kehaulani (Kay-HOW-La-Knee) Esch is Native Hawaiian and was born and raised in Hawaii. She is a graduate of the University of Hawaii at Manoa. In 2000, she and her husband moved from Hawaii to Minnesota so that she could attend William Mitchell College of Law, now known as Mitchell Hamline School of Law. In 2013, she was appointed the Ombudsperson for American Indian Families and was reappointed the Ombudsperson in 2021, when the Minnesota Legislature created a new independent agency, the Office of Ombudsperson for American Indian Families.  This new agency is the first state agency of its kind in the United States of America.  https://mn.gov/oaif/

Previous to her current job, Jill worked in a small Hawaii law firm for 24 years; after law school, she was a judicial law clerk to Judge John Q. McShane and an associate attorney in Duluth for several years. She is an active member of the National Indian Child Welfare Association (NICWA); in 2017, she received its Member of the Year Award. Since 2017, Jill has served as Co-Chair of the Children and Families Chapter for the United States Ombudsman Association (USOA).  Since 2000, Jill has been a member of the Minnesota American Indian Bar Association and was instrumental in having the Association’s By-Laws amended to allow Native Hawaiians to be admitted as regular members– which provides them with voting rights and being able to serve on the Board.